skip to main | skip to sidebar

As good as a cockroach?

A spiritual guru named Byron Katie supposedly achieved enlightenment one day when a cockroach crawled across her foot as she lay in bed in a halfway house. The cockroach was probably unaware of its role in her enlightenment. Even though I primarily ride my bicycle while playing guitar to relieve my own pain from the sensory issues and social rejection I experience from my neurology (I have a form of autism), it gladdens me to see the reactions of others to what I do. Most of the time the reactions are positive. I imagine someone having a bad day and driving home in a bad mood when suddenly they see a bicycling guitarist. The shock of seeing something so bizarre, so out of the ordinary, brings a smile to their face involuntarily and lightens their mood.

I have thought this, or at least hoped this was the case, for years. Just last night two (count 'em, TWO) different people volunteered to tell me this is the case for them personally. I just got a new heavy duty rear rack on Saturday, and I wanted to ride all weekend but the weather threatened rain. I went out Sunday night at sunset when I saw a break in the clouds. A teenage male friend of my neighbor's daughter was leaving when I left, and he told me that more than once he had been having a bad day when he looked up and noticed me riding and playing. He told me it cheered him up and that what I do makes his life better.

I did not ride as far as I had intended to the Hansen Chevrolet parking lot at the corner of SE Oak Avenue and SE Pine Street because it looked like rain could happen soon. Instead I rode to the parking lot of The News-Review newspaper and circled around a couple times then headed home. I heard people talking as I passed by a house where a guy had called me over to play for him a few days ago. I stopped there and talked with him again and played some more tunes including one he requested. He told me I make people's lives better by what I do.

So this was bizarre. I went out for a short ride daring the weather, trying to generate some publicity to get more people to come to my shows, and in the space of a few minutes I talked with two different people several blocks apart who both told me the same thing. This is not an ordinary topic of conversation, and I swear I did not initiate it. Both people told me this out of the blue of their own free will. I guess I needed it.

As you may have noticed, I don't post very often to this blog. I used to post maybe once a month, but sometimes three or four months slip by before I notice I haven't posted anything or before I find something to say.

Here's an update of the past three months: I still perform a two-hour show every Wednesday night at a local coffee house (Till It Shines). This has been going on since last October 3. Since January I added three songs by Christina Grimmie and Sarah to my show (Above All That is Random 4, 5 and 6) and one song (Sleeping Sun) by the Finnish metal band Nightwish. I have also come up with some more original instrumental tunes. In general, my show has gotten better over time, and I am a better guitar player and even more a better singer than I was six months ago when I started this gig. There is a small following of audience members who attend my shows. One guy has only missed one show and only because he was sick that night.

Last month the weather was nice enough on some days for me to ride and play outside, and generally since then I have gone out for a twenty-minute ride or so when weather permits. Sometimes I go out two or even three times in one day with an hour or two break between rides, but I am still way out of shape from not riding in wintertime. For now at least I can only handle a half hour riding at a time, and even then I am out of breath from the effort.

I have updated the Facebook page of "The Bicycling Guitarist" pretty regularly the past three months but still need to make the page look prettier. I also need more photographs, sound files and videos to post. Hopefully these are in the works. It might take a few more months, but by the end of summer I might have some professional quality multimedia to share with all of you.

Posted by The Bicycling Guitarist at 7:24 AM No comments:

Email ThisBlogThis!Share to TwitterShare to FacebookShare to Pinterest
Labels: Above All That Is Random, Christina Grimmie, Nightwish, Sleeping Sun, The Bicycling Guitarist, Till It Shines

In the newspaper, and more

Last Wednesday a reporter from my local newspaper (The News-Review) interviewed me for an hour before my fifteenth weekly performance at Till It Shines Coffee House & Deli in Roseburg, Oregon. She stayed for part of the show too. Her story was published in today's newspaper, but you need a subscription to view the article online, sorry.

As consolation, watch this video that was filmed last Saturday afternoon of me playing the novelty song Fish Heads on a bicycle in the DeForest Kelley Memorial Gymnasium, better known as He's Dead, Gym.

Email ThisBlogThis!Share to TwitterShare to FacebookShare to Pinterest
Labels: Barnes and Barnes, DeForest Kelley, Fish Heads, Oregon, Roseburg, The Bicycling Guitarist, The News-Review, Till It Shines

Music in my head

My life has a soundtrack in my head. Sometimes other people can hear it when I play guitar and sing in public, but most of the time it's just for me (unless telepaths are picking it up too). Sometimes there are lead guitar riffs, sometimes rhythm guitar picking or strumming, sometimes both. I don't usually hear bass and drum parts clearly but it's like they are implied. I suppose if I were The Bicycling Bassist or The Bicycling Drummer I would be hearing those parts clearly and it would be the guitar parts that were ghostlike. I have jammed with other musicians and been in a couple of bands. When I share original songs I've written, I don't usually tell the bass player or drummer what parts to play. I count on them to have their own muse direct them. I just play my guitar parts and sing my words, if any.

Because I have my own music in my head, usually other people's music only conflicts with it and gives me a headache. Sometimes though I play lead guitar riffs in my head to whatever other music is out there in the world of other people. Sometimes that is the only way to stay sane, especially if it is country music or rap that I am being forced to listen to. I've rocked out some elevator music too!

Usually the music in my head is instrumental (I am not The Bicycling Singer, as I tell anyone who criticizes my singing), but sometimes there are words. Sometimes words just happen, and music too, as in the following clip from a recent live performance of mine. As indicated in the description to this video, it shows me creating music out of nothing with no plans or ideas of what would come next. It just flowed out like diarrhea, or maybe something nicer than that I hope!

Posted by The Bicycling Guitarist at 11:37 AM No comments:

Still playing after an accident

I now have a USB microphone along with my USB guitar cable. Hopefully I will soon have new recordings available of my original songs. I am currently singing and playing guitar better live than ever before, much better than anything yet recorded or posted anywhere. Wish me luck on my recording myself using my notebook computer's sound card. Maybe someday I'll be recorded by professionals using professional equipment!

I had a bit of a spill on June 1 riding home from playing at a local bar. The accident was caused by catastrophic equipment failure. What I think happened is the old brittle plastic of the clamp to my bicycle lock had a hidden crack that was split by the tightening screw acting like a wedge. The clamp split, the lock tangled with my pedal, and my face hit the pavement a second later. My glasses were smashed, my face was torn and required stitches, my guitar took a hit but still plays (although I worry it seems to not stay in tune as well or as long as before the accident), and my bicycle required two hundred dollars of repair costs in parts and labor.

I didn't ride at all in June and didn't play as much publicly either, but I practiced more at home while waiting for bicycle parts and new glasses. In July I played many places, especially the Till It Shines coffee shop and the Kodiak bar. My practice seems to have paid off because I am getting more compliments than ever on my playing from total strangers walking up and telling me I sound good. Yay.

Posted by The Bicycling Guitarist at 5:59 PM No comments:

The Bicycling Guitarist on BrickLink 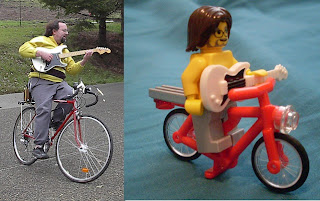 Posted by The Bicycling Guitarist at 6:32 AM No comments:

It's been more than five months since my last blog post!

That's longer than I had thought. I still perform my music some Tuesdays at a local "open mike" night (the Jersey Lilly), but no longer every Tuesday there as I did for most of last summer, fall and the first half of winter. I still play other places too such as the Mystic Earth metaphysical bookstore and Till It Shines coffee shop.

For the first time in thirty years of bicycle guitaring, beginning in February this year I have a place to ride and play indoors when it is too cold and wet to play outside. To watch me doing this, check my most recent YouTube video. A local middle school let me use their gymnasium for one hour a night, two nights a week. Then they cut me back to one night a week, but allowed an hour and a half. This may end soon, but the weather is becoming nice enough for me to start riding and playing outdoors again. Hopefully next winter I will be able to ride and play indoors again.

Last Saturday (April 7) I played my guitar along to the selections of other customers on the jukebox at a local bar (the Kodiak, formerly known as The Beaver Den). After a while I went up to select a few songs myself to play with, and to my delight saw that The Beatles finally have their songs available for digital jukeboxes! For the first time ever I played along to Help! and Blackbird from a jukebox and the crowd loved it. Later I found out a lot of The Beatles' music was released to 50,000 jukeboxes starting April 1.
Posted by The Bicycling Guitarist at 7:56 AM No comments:

The Bicycling Guitarist
I ride a bicycle while simultaneously playing guitar. I've done this twenty-five thousand miles since the early 1980s.